I’m getting used to the idea that I’m facing a bit of surgery. Last week was full of ‘tests’ (ugh); this week is BAU, but next week we meet with the Dr. to find out the results of all these tests. Wish me luck, please. Ah … when you do with me luck, would you mind adding a prayer or two? We’d appreciate it.

All kinds of ‘things’ are going on at Gran’ Nanny’s Goat Milk Soaps. First, the hubster has had the flu; the world stops when one of us is ill. I’ve been staying close to him and making sure he drinks plenty of liquids. He’s better.

What a snow season that was: I say WAS because we’re hoping that the snow is all gone for the season. Those of us who made it through the season are stronger and our hearts are with the goats that didn’t make it. Each passing has been logged in our chronicle of lessons learned.

I already conduct fecal tests on the herds so I know which dewormer to use. All I gotta do is monitor the goats that have a higher propensity for getting worms. Buttressing their immune system is always a good idea.

I’ll deworm for stomach worms and coccidia at the beginning of the season as well as through the season, keep hay as a free feed, and somehow keep water in the barn throughout the snow storm (easier said than dun) but I have a few months to figure this out.

I learned that keeping free feed minerals and red cell is helpful. For the goats that want/like these treats, it’s available for them.

Hauling water the four different pens was our biggest challenge. But next year that will not be an issue. Like I said earlier, I’ve got a few months to figure this our then get it fixed before next winter. Note: need longer, shallow troughs with heaters in them instead of deeper bucket-types so more goats can drink at one time.

But for the most part, being snowed in the the family for two days was delightful. We napped with the dogs, read for the first time in a while, and watched a movie or two. Mind you, we did this in between barn yard visits. We had already setup the heat lamps in each barn so our critters could curl up under them … if they wanted to.

Our silly horse chose to stay outside most of the time. Go figure. Silly horse … love that guy. We absolutely must get a saddle one of these days so we can ride that little bugger. I say little, he’s a Walker and a tall one at that. I’ll measure the hands one of these days. I’m 5-4 and his wethers is still over my head. Sigh … .

With all this winter weather, I’ve had to spend more time caring for the goats than usual. Yup, I’m behind on everything. Again, like everyone else across the country. Stay warm, everyone

Taking a few days off from soap making to catch up on bookkeeping, paperwork, and TAXES. Wish me luck and happiness … please.

For the past few years Karin Christensen with Scientific Animation & Illustration has released her famous Carol of the Goat Bells around this time of year.

The goats, the song, and the sentiment combined put a smile on my face, warms my heart, and sparks even more of the Holiday spirit within me.

Please accept this song as a gift from our goat herd at the Sleeping Dog Ranch Nubians.

The Carol of the Goat Bells

The popular Carol of the Goat Bells performed by the cast of the Biology of the Goat animations.

May the Spirit of the Holidays bless you and your families, 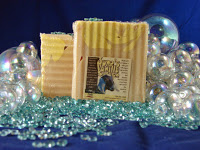 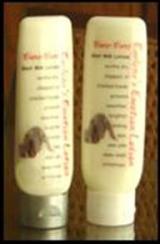 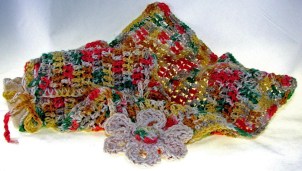 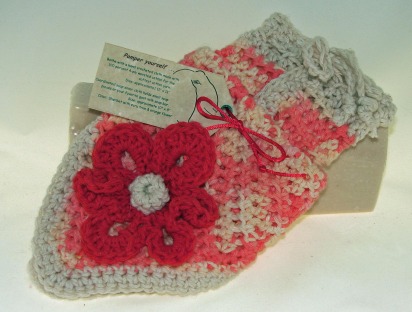 Use CAUTIONn at all times 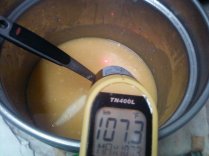 Keep an eye on the heat 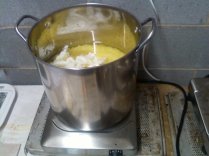 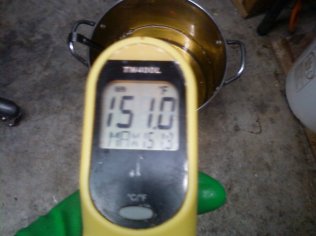 Keep an eye on the heat; add lye/milk mixture

Trace is beginning to set in 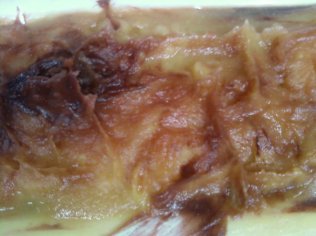